If you can’t stand the heat get out of the kitchen? (More…) 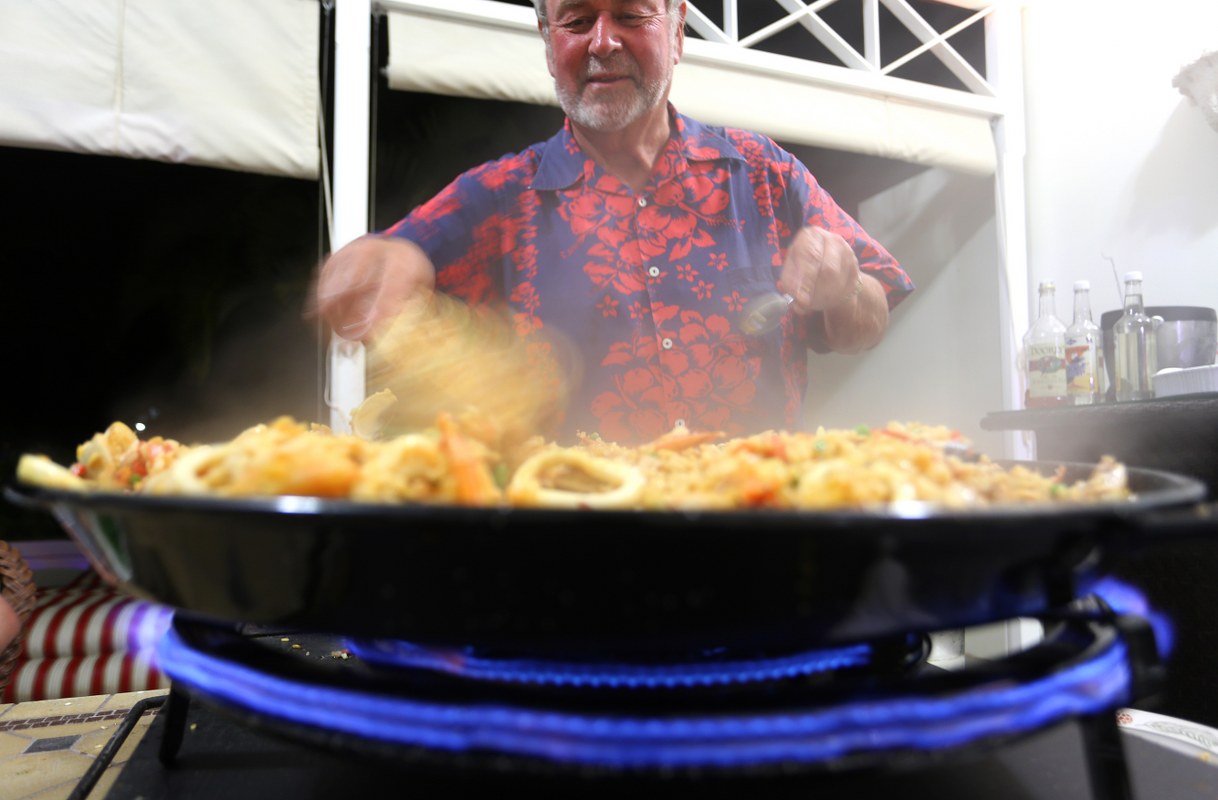 Our race crew arrived compliments of Virgin Atlantic, our preferred carrier. They let us bring surfboards, kites, and all sorts of sports kit for free. Fantastic!

Last person to check in was Jackson Boutel. It was by coincidence his 25th birthday. I had the privilege off hosting his 18th in Antigua after he and I sailed the Atlantic with Ned in Concise 1.

Team Concise don’t need an excuse to party – so it was all hands on deck – lets make it special for Jackson. It was in any event the perfect opportunity to try out our new paella dish and down a few Stag beers. Wine and spirits are off the menu.  We are “in training”. 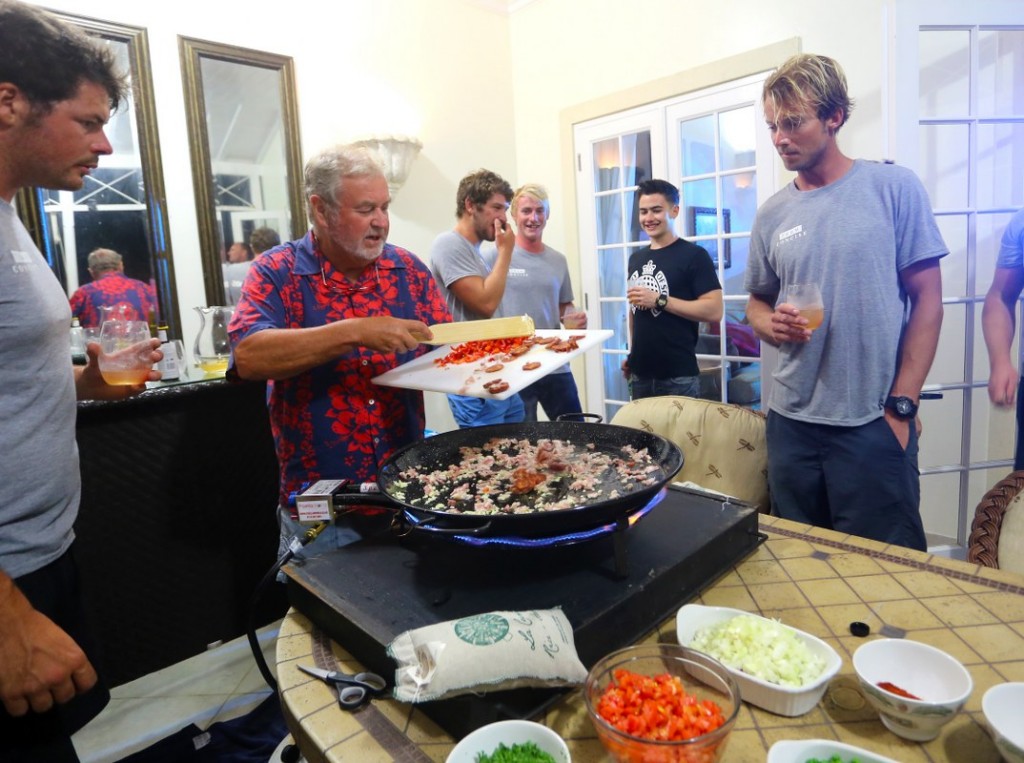 I first had paella in Alicante (Spain) in the 1960’s.
Rice, chicken wings, bits of fish and shrimp heads. “Peasant food” really, but exotic back then, and most important cheap.

Much later, I sailed the Atlantic on Adela, the beautiful 240foot schooner skippered by my friend Steve Carson. His new partner  (now wife) Anne did her version of the dish for the crew. Exotic hand picked Calasparra rice, organic chicken breasts, and a sincere apology from the galley as the dish had, “Only half a lobster tail per person”.
Super yacht Paella that – and definitely not cheap.

I have my own recipe. You can find it further down. And I set to work creating a feast for the “boys”. I had all the kit – my new paella cooker, the rice, chorizo, shrimp, chicken – the works. I fired up, and with our in house DJ Jack Francis from the Ministry of Sound selecting the tracks’, it was “Paella Rock and Roll”. 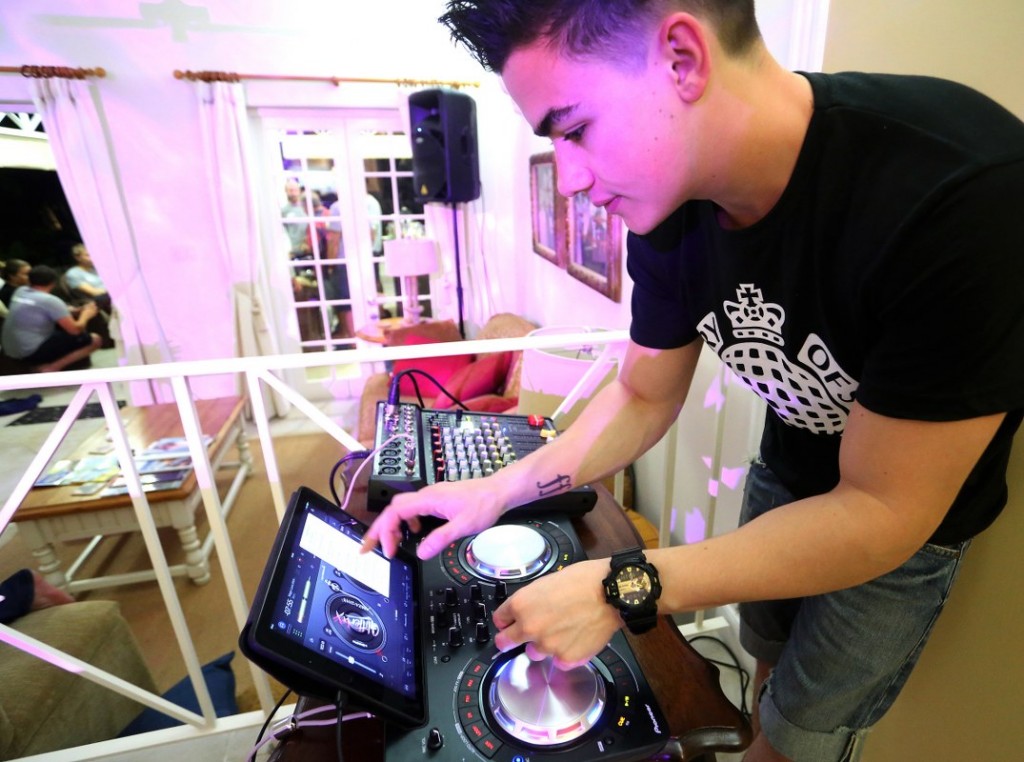 I hadn’t cooked paella in the tropics before. The 85 degrees of heat here, added to by the three-ring gas burner fuelling the pan, soon had me sweating –reeling. I only made it through with the help of numerous Stag Beers plied by my hugely attentive and by now ravenous crew.

Even though I say it myself, the dish was a masterpiece.
A picture to look at – a  “Picasso of Paellas” – and great tasting too.  While the “Gannets” dived in, I sat back and cooled off.  I’d never been so “baked”  while cooking. Mind you, as they say, “If you can’t stand the heat, stay out of the kitchen” and boy apart from the cooking it is certainly hotting up here right now.

It’s just hours to go to the start of the Mount Gay Rum Round Barbados Race, and the temperature is definitely rising. Everyone is looking forward to the show down between Concise 10, (Ms. Barbados) and her sister ship Phaedo. Two of the fastest off-shore racing boats in the World.

Miss Barbados lifted her skirts yesterday and scorched round the island in less than three hours. An hour faster than last weeks run. And a new informal record! Unfortunately we tore our No1 racing jib so we are on our old one. That was a bit of a blow. But the crew is  fully up for the challenge.

There is no doubt we are the underdogs. Phaedo has 18 months more experience in these boats than us and have a new set of “killer” raw carbon sails. But we beat them on a similar course last summer, so it’s “game on”. And anyhow my crew owe me a result if they want more paella?

Follow the race live via the tracking link below:

In a couple of spoonful of olive oil , over a low heat, in a paella pan (or largest frying pan) fry up some diced pancetta, sliced chorizo and crushed garlic clove until all brown.
Add chilly flakes to taste.
Throw in chopped onions and red peppers. Stir till softened.
In separate pans, just lightly brown chicken thigh in olive oil with garlic cloves.  Do the same with some large raw shrimp until they go barely pink.
Pour the Callisparra rice into the pan and stir until its covered in the flavoured oil.
Add an appropriate amount of hot chicken stock to just cover the rice. Then, place the chicken pieces around the pan. Add some fresh thyme. Stir gently and simmer for about 6 minutes. Correct the seasoning.
Add the shrimp. Place mussels, hinge side down all around the top of the dish.  Add fresh chopped tomato and peas for colour and simmer a little more.
If the dish dries out before the rice is cooked add more liquor. Don’t stir too much. You don’t want the bottom to burn but you want it to “catch a bit”, go crispy, especially around the edges. This is the best bit according to the Spanish.
Enjoy.