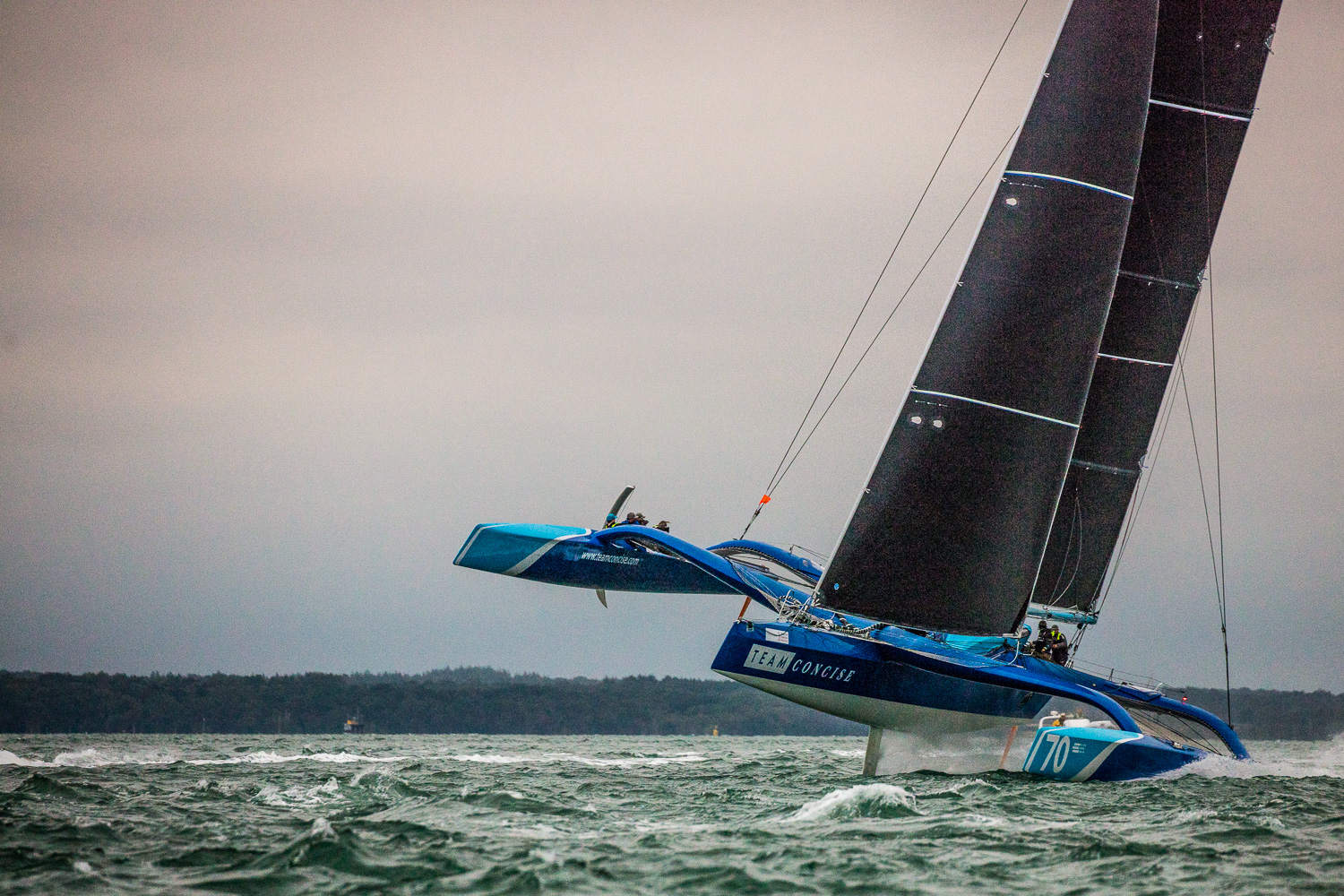 The 50 odd mile Round the Island Race has been a prominent feature throughout the Team Concise MOD 70 program. It was the first race we did hours after taking delivery of the new beast two years ago. Over the past two years we had some great battles flying around this, our tricky little “backyard” course.  Whether it be racing others or the clock, it’s a hard fought over bit of turf where seconds count. 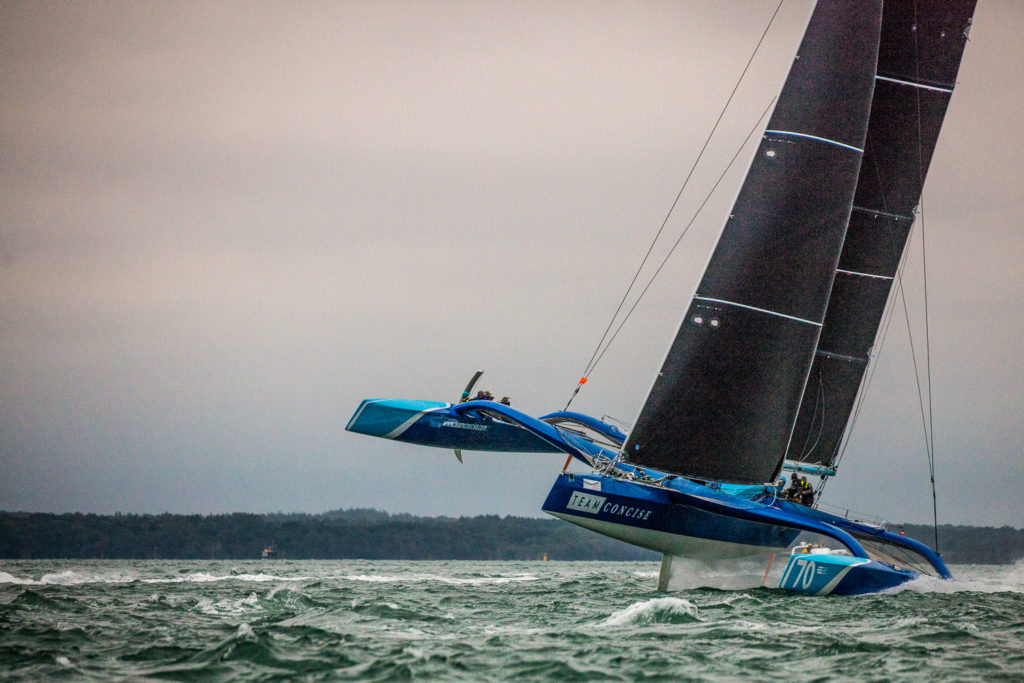 C10 – Blasting out of the Solent

Although some of our close rivals from the previous years weren’t going to be there for this edition, their ghosts were. The MOD 70 trimarans had taken line honours in this race on three previous occasions and broken the course record on two of them. Although we’d had the line honours, it was a record that had eluded us in the past. This record belonged to Phaedo, our biggest rival from the past two years.

Ultimately the speed of our ‘lap’ would be decided by the weather and although the North Westerly direction looked doable, the forecast predicted lightish winds. The day would need to over deliver if any magic was going to happen.

A mixed team of old and new hands turned up just before dawn and geared up to push off the dock at 0415. We were to be one of the early starters behind the big mono’s. Ned briefed the crew on the days objective and we spoke optimistically about what might be possible… but as we hoisted our new big, black mainsail conditions looked pretty much as forecast. The breeze just felt a bit too “soft”. It was only as we began our timed run to the Royal Yacht Squadron start line that things really began to pick up. The wind had built and the big blue tri was coming to life. As we crossed the line and the central hull began flying our eyes collectively narrowed. This could be on. This was no longer a “jolly” with no real competition. Until it was out of reach, we were on a record run and those seconds were counting. 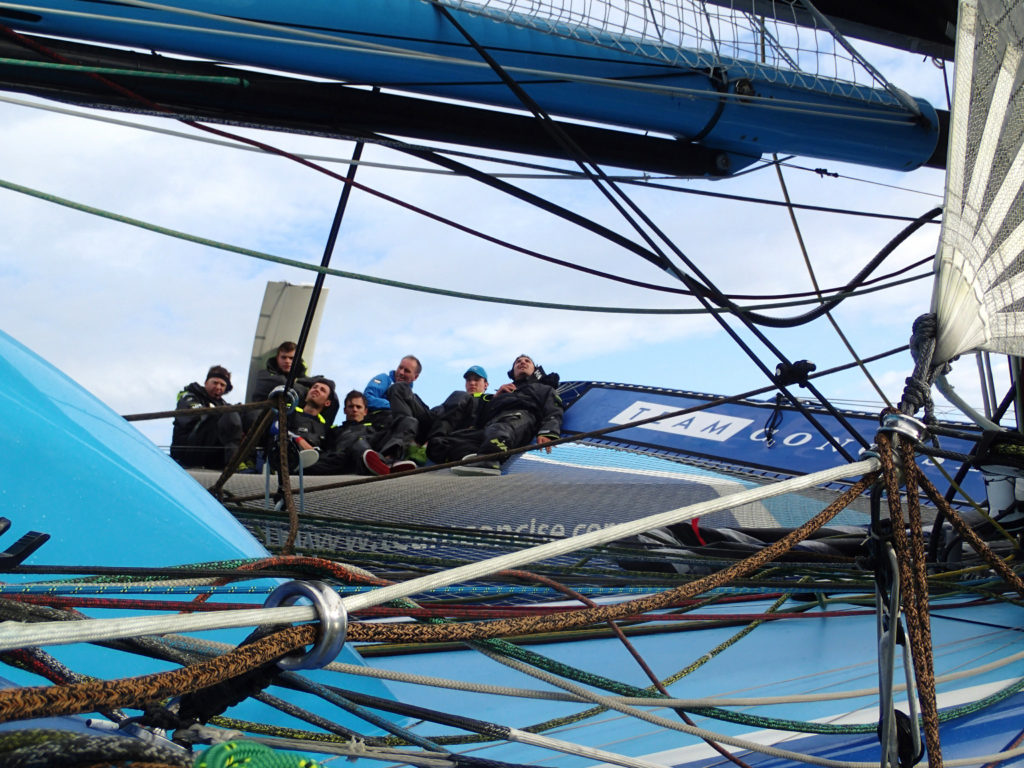 With tide in our favour we literally flew up the flat waters of the Solent on a tight reach. Every spare body was lying low on the windward float and it didn’t take long to overhaul all the big mono’s that had started before us. The last of the spectator RIB’s peeled off just past Hurst Castle as we beared away from the wind a little more and Jonny lined us up to shoot the narrow gap between wrecks and rocks under the jagged Needles. I personally didn’t even see it as at this point all hands were on the pumps as the big gennaker was being unleashed for the sleigh ride out to St Catherines.

We had made great time up the Solent and the wind was even stronger out here. We had the “bit” fully between our teeth now. The day was seriously over delivering as we saw winds hitting 30 knots on this leg. This was brilliant sailing. Over 35 knots these boats start to sort of rumble. It’s almost as if the ride hardens up and it feels more like your rolling over a hard surface rather than cutting through a soft one. The leeward foil is working real hard and those big numbers on the log can only mean the seconds are now scrolling in our favour. The log was set to read from the GPS as the actual paddle wheel in the hull to measure the speed through the water was often in the air. We were pushing tide out here so if we were hitting around 40 knots on the log it meant we were quicker through the water. We couldn’t even see the next boat. The “blue bus” was smokin’ and taking us all along for one hell of a ride.

With a full rig and substantially stronger than expected conditions we slightly overstood St Catherines and thus peeled the gennaker down to the J1/Solent. This did little to slow us down and as we tried to come up harder on the breeze around St Catherines we would often find ourselves “inside” (Flagging) the eased mainsail whilst still flying the main hull. It wasn’t ideal but in some respects it was a nice problem to have. We were anticipating the wind to drop as we closed on the lee side of the island but it wasn’t happening in a hurry. It was going to be marginal to harden up much more on the wind with this much gear up. We were still sitting in the 30’s but not heading directly at the next mark off Bembridge Ledge. Calls were going back and forth discussing options but eventually the anticipated decrease in wind speed came and we hardened up on the mark. The hectic pace slowed as we settled into an upwind mode which would ultimately get us up to the Forts and back into the Solent. This was the stage where we would start to lose the seconds gained in the mad rush down the back. By now we knew we were on a good time and the tension began to really build. After going so fast this upwind work, even at 18 knots felt painfully slow. Although the wind was dropping there were no “killer” patches and once back in the Solent we pointed her straight up for home. It looked good for a one-tack affair to the line albeit in winds which were now ranging from 10 to maybe 16 knots. We could feel the seconds ebb and flow with every gust. The crew ran crouched low from hull to hull to try and dodge the draggy apparent wind and trim the boat so that she kept flying through the varying wind. Jonny looked tense as he checked his race software on his tablet computer which predicted our time and trajectory to the line. Sometimes the Solent seems to go on forever. We knew it was going to be close and there was no show boating as, holding our breaths, we finally rode one nice gust across the line to finish. That was a good lap.

Had we done it? No one was sure. Jonny thought we had done exactly the same time as the record… or maybe even missed it by a second. Our joy at having done such a fast lap was subdued. We had missed this one by three seconds before. Calls were made to the race committee but they seemed to be evasive as they themselves checked their numbers. Surely not. Eventually it was social media that broke the news. Team Concise breaks the Round The Island record by one minute even. HAPPY DAYS! There were whoops and cheers of joy, hugs and laughter for a fantastic lap now rewarded. 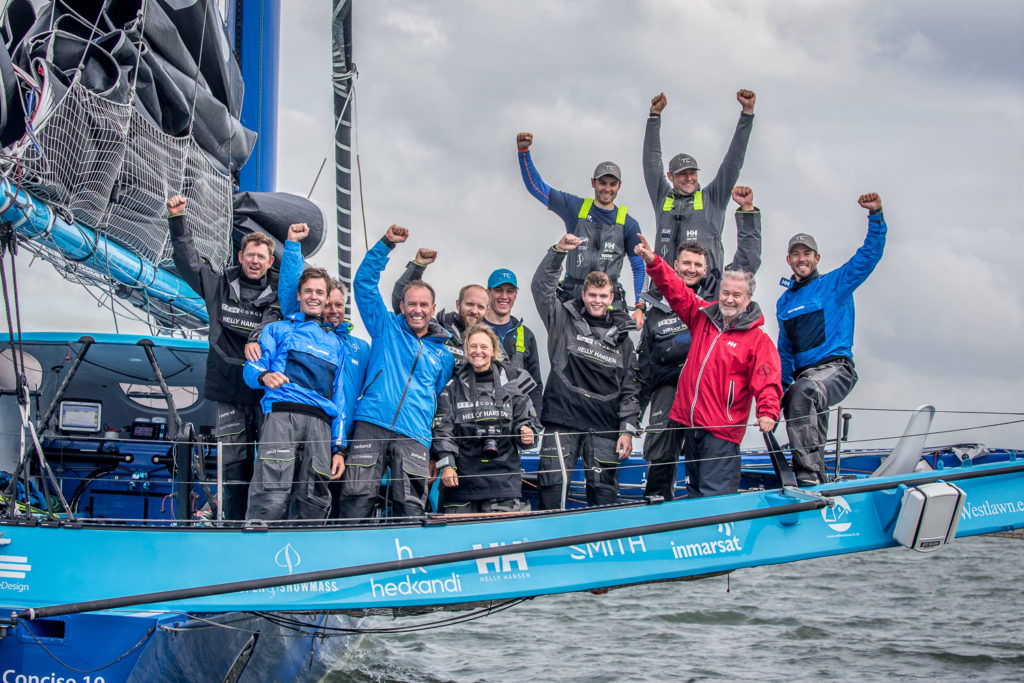 Somewhere behind us, un-noticed, an old ghost faded away.

We dropped the sails and proudly tidied and then parked our fantastic steed up one more time in the Hamble River. Once all the covers were on we all piled in a RIB and headed back across the Solent to the Terrace of the Island Sailing Club. By 0930 we were drinking champagne and eating bacon sandwiches after watching the first monohulls cross the line just under 2 hours behind us.

What a fantastic way to start the day… all in our own backyard.