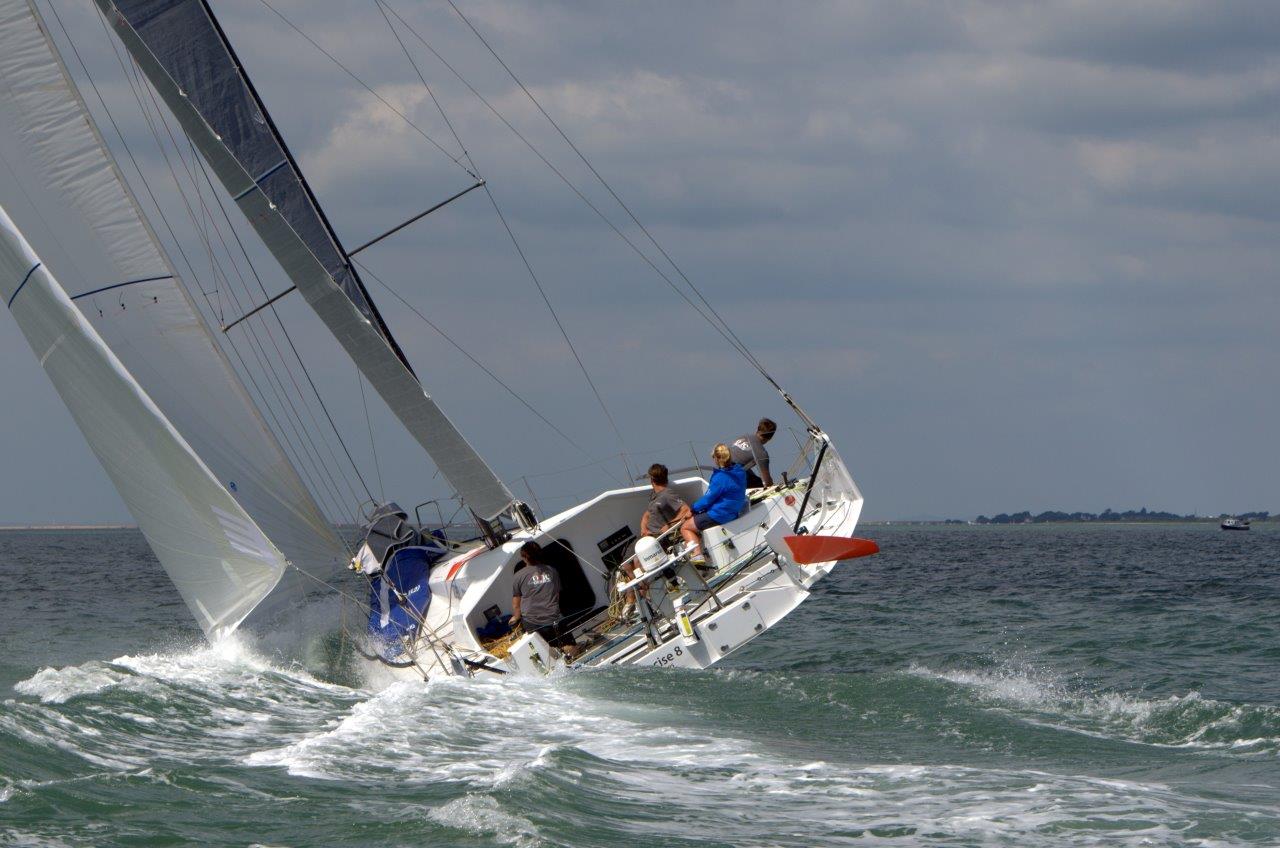 With regular crew members racing in St Petersburg, On Her Majesty’s Service in Belize and flogging race boats in the south of France, Race Captain Ned Collier Wakefield had his work cut out last week.   He had to familiarise three rookies with the boat, get them togged up and squeeze in a few hours training prior to last Fridays 150 mile, RORC, Cowes to St Malo Race.

With Annabelle Vose (19), Matt Brushwood (20) and Will Semken (23) on board, Ned was very much the ‘old man’.  Even so, they still registered the youngest team in the Fleet.

With just a few hours training together, Ned chose discretion rather than valour.   He decided to start in the middle of the line, away from the more favoured but congested northerly end.  This gave an advantage to Roaring 40 and 40 Shades of Grey, who sailing more freely, managed to take a 300 yard lead by the time that the Class 40’s  were half way to the Needles.

With Annabelle driving, and still getting to grips with the feel of the boat, it was left the boys to trim for her while Ned got on with navigation and calling the shots.  With a ten knot breeze coming and going and Annabelle playing for whatever she could get, by the time Concise reached the Needles, they had managed to drive through the Iee of the other boats and establish a few minutes lead.

Bearing away for the Casquets and staying high, as the breeze came further forward, everything was plain sailing until the wind died and all the boats bunched up again.

As a fresh breeze filled in and with Concise sailing at 70 TWA in about 16 knots she managed to extend her lead once more.  At Guernsey, the crew changed to the A2 for the final run to St Malo, with them hitting speeds of 14 to 16 knots along the way.  Concise 8 and a jubilant bunch of new kids were the first Class 40 across the line off St Malo at 3.22am.  The next boat was some 21 minutes behind, with a further 2 following just a minute thereafter.

Ned was happy to finish the race with crew and wardrobe intact and all systems fully functioning.  This weekend sees the double-handed race around the Isle of Wight, where Team Concise will seek to retain the record they set some two years ago – just over four and a half hours for the 60 mile course.