DAYLIGHT WAS SECOND THIS YEAR (More…) 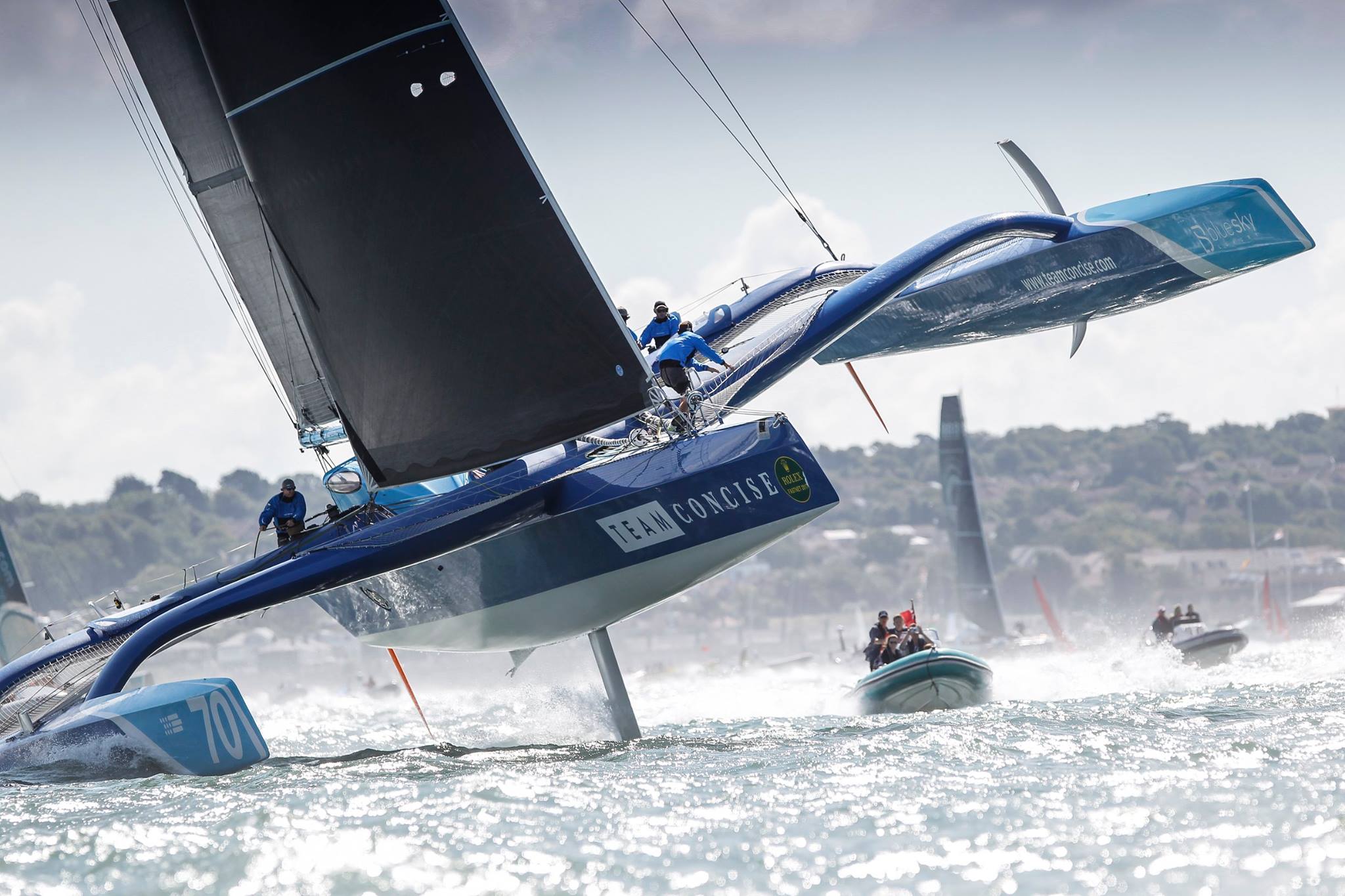 With all of the variables that go with yacht racing:  the crew, the competition and obviously the weather, each race is totally different. This year, for us, the lack of competition for Concise 10 detracted from the Fastnet Race. On the other hand, our crew could simply push Concise as hard as they could, “straight line “, around one of the world’s most iconic racecourses.

We had the boat. We had the team. We had the sails. With an iconic race like the Fastnet, and the fastest boat, we just had to deliver a good show. 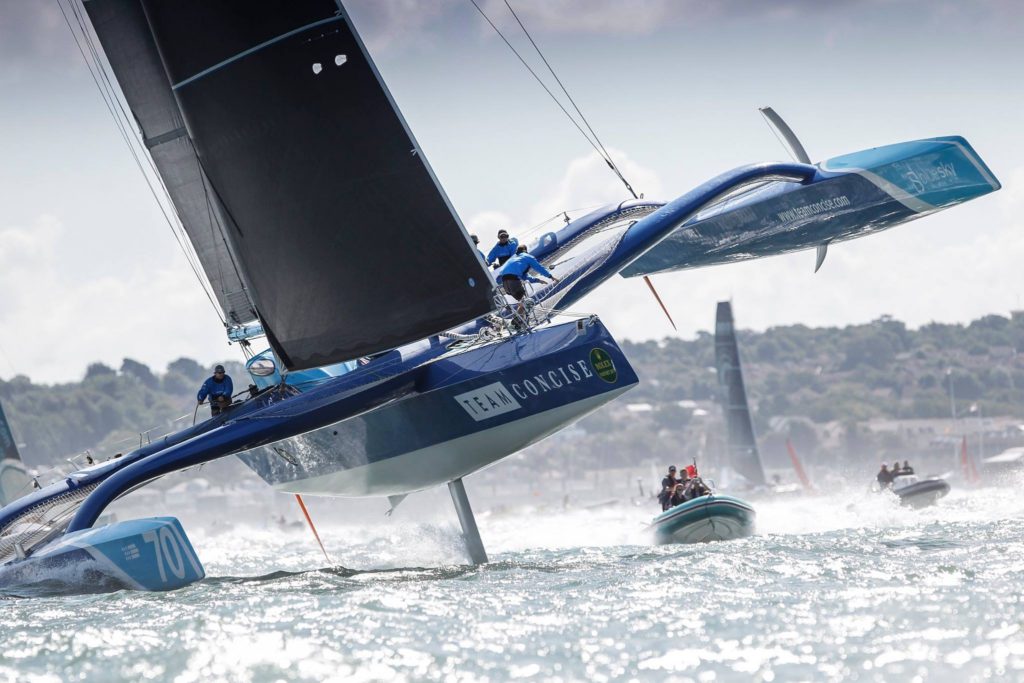 I personally don’t put much value in long-range weather forecasts’, but as we motored out of our Hamble Point base on race day, it looked like it was bang on.

The routing had us beating all the way to the Fastnet Rock, with a wind shift from SW to NW right as we turned the corner at Lands End –  the South West tip of England.  With the wind on the nose, there would be no records broken this year. Mind you, a few weeks earlier, a marginal forecast had seen us to break the all time Round the Island Race record.  So we pushed off with our minds set on sailing our big blue tri hard and fast (as usual) and seeing what happened.

The Solent was rammed with 380 boats getting ready for their big adventure.

It’s always fun to sail through the fleet, waving to friends’, checking out the other boats. With so many dramas about to unfold you can’t help feel the excitement.

With the hundreds of spectator boats all around us we had to be “all eyes”. Once launched across the line, Concise 10 quickly found her feet and was soon up on one hull. Not the best for max speed. But Ned was driving and the fleet deserved a show. From our perch up on high it looked fantastic. A sea of speedboats, ribs and foaming water.

Jonny Malbon called the “Nav”.  As we tacked our way up the Solent conditions built, so we dropped in a quick reef as we went through a tack.  The crew making the complicated move look simple. Once through the narrows at Hurst Castle the call was made to “cut the corner” and go through the North Channel. Then, with the start behind us we dropped into our watch system.

With a crew of eight, we set three watches of two  – doing two hours on, two hours standby and two hours sleeping.  Well, if that’s what you call being constantly slammed against the deck head and all the time noise like thunder. The navigator and bowman were out of the watch system and on-call as needed.

Despite a 99% full moon, the first night was really dark. Nonetheless, the wind was solid and the seas well within the comfort zone of our 70’ trimaran. Concise clawed her way upwind. We tried not to pinch too hard, as bearing away a little gives us enough of speed gain to make the extra miles worth it. As they say it’s all about VMG on a tri.

Day or night we aim to keep the central hull just skimming the surface.

That way we know we are using all the boats weight to allow us to power up as much as possible. The sails are then trimmed so that we hit the perfect numbers.

Olympic Gold medalist and BAR sailor Giles Scott was with us again as one of the helmsmen. I think we were all kind of curious as to how he would fair offshore. He’d joined us once before on the RTI race but hadn’t had the chance to drive then. This would be his first shot and he’d also be driving his second watch at night. It was no surprise to see him settle in just fine and quickly put everyone at ease. I guess he’s pretty comfortable with the tiller option.

It didn’t take long before we were ticking off the headlands. Portland flew by. We passed by Start Point in the darkness. Just close enough to feel the lumpen tidal race. We’d already pulled out a hefty lead over the following boats and were keen to open it up as far as we could by the finish. Concise was flying and we were pushing hard, willing her, to do her thing. The Eddystone was next and then we drove through the ships anchored off Falmouth. In order to cut inside the traffic separation scheme at Lands End we had to pass through the ugly seas pushed up by “wind over tide” off the SW corner of England. With the tidal rip bouncing us around, and us sailing dead up wind it was as they say, “RUFF”.

It’s always difficult to know what to do with a trimaran in these conditions.

If you power them up you can hit the seas in a bad way and do damage.

If you sail slowly then all three hulls get pushed and torn around – trying to react independently to whatever wave they are dealing with. Either approach can be brutal on the structure. In this instance we chose to slow down but even then it was a real horror story muddling through.

As usual, the boat took it on the chin and soon it was onwards and upwards.

Now, fortunately, the wind didn’t swing around as hard onto our nose as forecast and we had a few great hours of sailing. Not quite, but almost straight up rumbline towards the Fastnet Rock, 170 miles away.

We knew the wind was going to shift NW so every mile we made pointing at the rock was a keeper. We figured, quite correctly, those following wouldn’t be so fortunate. Concise, meanwhile, continued to steam uphill at a steady 18-20 knots. About now, tiredness began to creep in and the exhausted crew were more than eager to collapse in their bunks when they went off watch. Most managed to get at least an hours “shut eye”.  In this upwind mode, sailing the boat can be handled by the helmsman with a trimmer taking care of the cockpit. While the boat is easy enough to steer, as with many things, it takes a lot of concentration to drive well. Having her well trimmed makes life a lot easier.

We had positioned ourselves to the east of the Fastnet Rock and screamed along the Irish Coast on our approach. To get the angle right we made one final tack towards the green hills of Ireland, using an old castle on the hill as a marker, then after our 350 mile beat to windward, we tacked a final time for one of sailings most iconic mark. 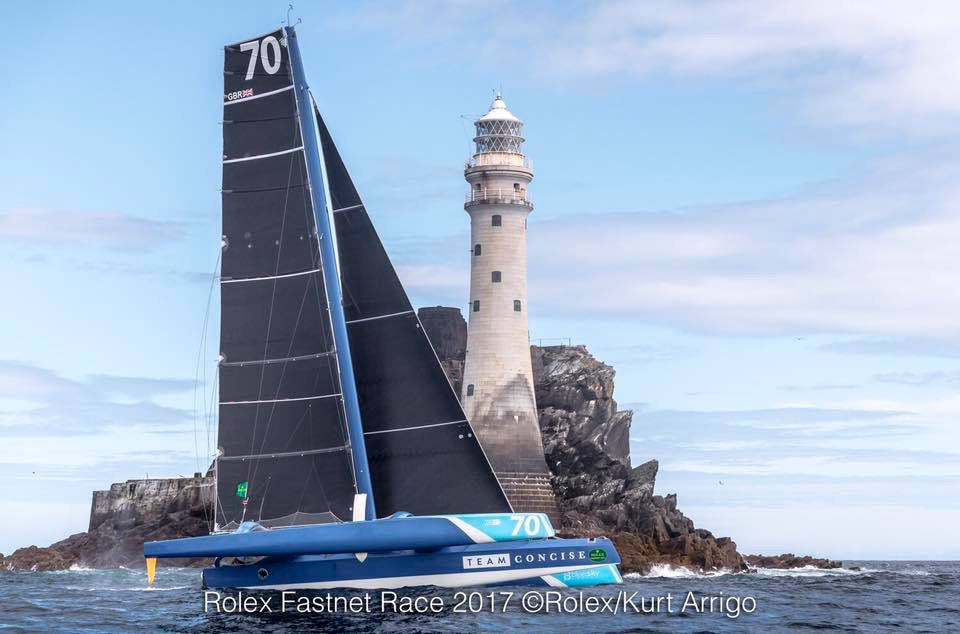 Everyone was on deck to witness “The Rock”. While mugs of tea were handed about the boys shared stories of rounding past.  For “Crusty” (aka Martin Watts), this was his 17th Fastnet. It was Giles’s and Olli’s first.  We were so far ahead of the rest of the fleet (110 miles), that there were a few spectator boats out there ready to witness the big blue tri’s passage.

The Fastnet Lighthouse looked down on us, dark and foreboding. Worthy of its status.  As we accelerated round the rock we were just able to catch glances of it as we concentrated on setting the big gennaker to power us home.

Once clear of the TSS Jonny called for a gybe back East to get into a band of more pressure (wind) on that side of the course. The weather was there, just as predicted, and for a glorious few hours we steamed along at 30 knots heading straight at the next mark. It was a beautiful day. Perfect for a ride aboard this fantastic boat.

For those of us who completed the last Fastnet on Concise it was extra special. That edition of the race was painfully slow. Light winds plagued the course. We made a few average calls and sorely felt the consequences. The final indignation came as we sat becalmed under Raim Head just short of the finish line. Not one, but two big mono hulls; Comanche and Rambler came sliding out of the darkness to pip on the line. That hurt!

I’ve personally had some great battles against Rambler on another smaller tri but never quite managed to take her. She’s a great boat for what she is, but this year belonged to Concise 10. It was pretty nice to see the miles we were tearing out of her. As we sailed away from the rock, we were keen to pile on many more.

Conditions backed off a little as the wind continued to swing leaving us pointing South of the Scillies.  A glorious sunset saw the day out as we rolled along on a gentle swell at around 20-25 knots. The full moon rose soon after.

In his command chair, Jonny was getting live wind reports from weather stations on the Scillies and channel buoys telling tales of light winds. The barometer was rising. Even lighter winds ahead?

The option of covering extra miles and going wide around the TSS below the Scillies was put on the table. Where we were, to the west, there was actually more wind than was forecast, so we decided to go the long way around.

Good call! The wind held out for us. The big tri kept rolling.

With only 10-12 knots of wind and flattish sea, lying in my bunk, I was “roused” by the silence . That could only mean we were still flying the main hull, sailing tight angles with the big gennaker strapped in hard. I went on deck to take over from Giles. The boat was highly loaded with only a narrow groove to drive in. I was impressed with how comfortable Giles seemed to be helming like this in the dark only his second watch.  Quick learner?

Sailing on at near double wind speed we had to dodge some of the Fastnet fleet still trying to clear Lands end on the way to the Rock. Gradually, we hardened up on the wind and brought our three bows up to bear on Plymouth. Once again the wind got light as we approached the finish line. But this time it held up enough for us to creep over the line just as the first Volvo 65 rolled around the Fastnet Rock 250 miles behind. 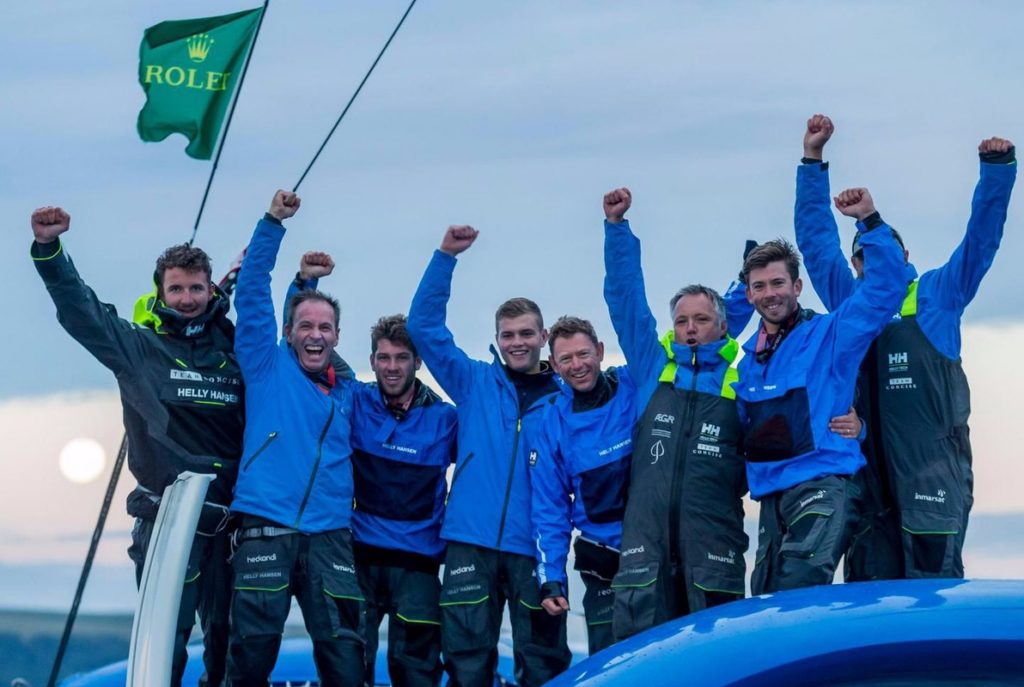 Concise 10 was just fantastic! It was great to see her appreciated not only by those onboard but also by the hundreds of boats who came out to see her in action… certainly at the start. I don’t really know why more people don’t race tri’s. I guess it comes down to sticking with what you know. If you grew up on mono’s you tend to stick with them. Whenever we get a few of these tri’s together we always have truly epic battles often won or lost by seconds.

I hope I get that opportunity to race again in the future. Meanwhile, we tied up in Plymouth, had a beer in a bar and a much appreciated Full English Breakfast .

With a couple of joy riders we set off to sail Concise home, 130 miles away.

Later, near dusk, we put her covers on and tied her up safely at Hamble Point.

A couple of us went for beer in the King and Queen on Hamble high street. I don’t think the second boat had finished yet.

Daylight was truly second this year.