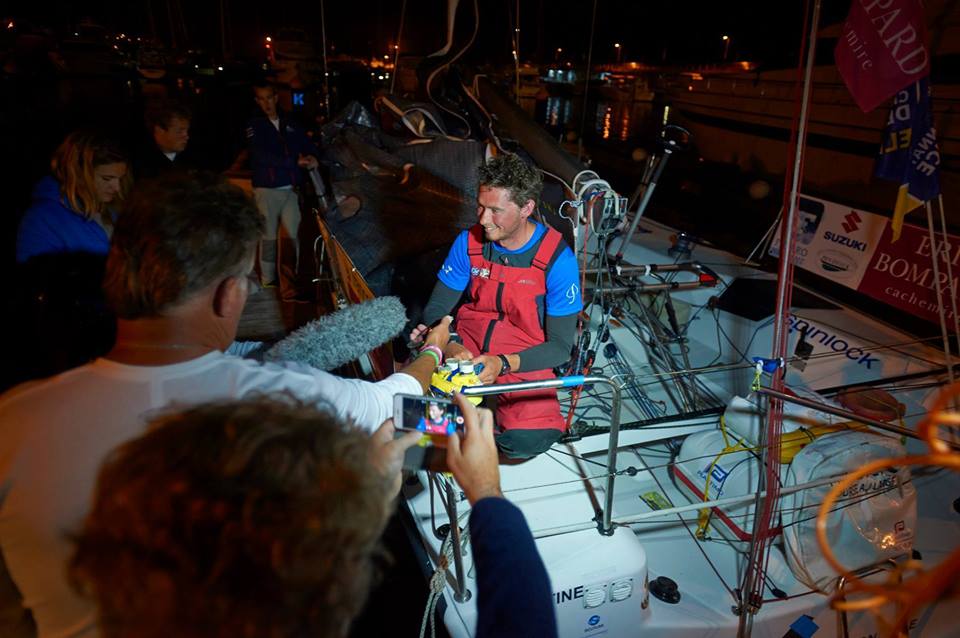 Leg 1 of each Solitaire I have done now always feels like an epic one, but then you have to realise that it is just the first leg and there is still a whole lot more sailing to go. Leaving Sanxenxo, like arriving there was extremely frustrating, as the wind was coming from the land it makes everything very unstable and hard work. We had a pretty crazy first night with thunderstorms, lightning, drifting and then into the 35-45 kts upwind once we passed Cape Finistere. I had a terrible first night and found myself pretty much last, it was a hard moment mentally knowing I was behind and all we had to look forward to was four days of upwind into 35-45 kts, fun! I stayed as positive as I could and I knew there was still a long way to go and I could get back into it. Slightly further along in the race, the call was made to suspend the Leg due to a dismasting and the weather forecast increasing slightly. We already had around 40 kts and we hadn’t reached the windiest part, which would have meant a night into around 50 kts.

We pulled into La Coruna and two days later after a lot of ice cream eating and a few of us riding around on Segways we were underway again heading for Concarneau. We couldn’t have a different leg, we started into the still strong winds and during the night the weather changed and the next day we were downwind all the way to Concarneau. It was quite nice light downwind conditions and there was the chance to really get a lot of sleep in, which would proof to be very beneficial as the next leg was still planned to leave on the same day! I think it was the shortest stopover I have had before, effectively one night of sleep and the day was spent sorting the boat out and then going to briefing after briefing. It was a tough one to have to start again so soon but I didn’t really mind as we kept the momentum and also I knew there would be a lot of tired people which could be interesting on the water…

Start of Leg 3… Delayed, for around two hours while the wind settled and then we were off. Well almost, I was over the start line, damn it!!! I had never done that before in a Solitaire leg and I was pretty frustrated and was pretty much in last place for the first 24 hrs. I got quite stressed out and annoyed with myself and it wasn’t helping me go any better so I tried to relax, have a bit of food, some sleep and then things started going a bit better. I managed to make a good call when we rounded Ouessant and stayed in the stronger tide passing a lot of the fleet to gain back to around 11th position. YES! I thought, I am back into this a bit. It was then a long upwind to round the mark at Roscoff, we were going fairly quickly with the tide but soon it turned against us and we headed into the shore line for a bit of good old Figaro style rock hopping, made more entertaining by doing it at night.

Rock hopping at night must be one of the most adrenaline pumping and stressful things you can do, pushing in as close as you can to get out of the adverse current. Seeing someone tack super close to a rock and then trying to push a bit past them, just a bit closer then I might have a better lane out. Your tired but wide awake, stressed, nervous, constantly checking the nav and where the rocks are, you can feel you heartbeat pounding in your ears and then we were around the mark and heading North to Wolfrock, few no hitting of rocks, right try get some sleep now! Mid channel we passed through an area of light wind and once it had settled back I was a bit annoyed I didn’t put myself in a slightly better position but it wasn’t too bad. I was nearly around Wolfrock, just 2.5 miles from the thing and the wind went North on us. This made it a full upwind against the tide beat to the mark and some of the boat were already around! AAARRRGGHH, I think I lost my voice a bit in this leg at how much I ended up screaming and the wind, it was extremely frustrating and was almost a feeling of desperation to get around the mark knowing every second you haven’t rounded the mark the others are getting further away.

Finally getting to Torbay, it was a great feeling to finish this leg and not loose too much overall. Crossing the line it felt like the Leg had taken pretty much everything out of you but still a great feeling to be in. Now time to recuperate in Torbay and then one more to go!

See you in Dieppe