Having started sailing at 7 years old at his local sailing club, James progressed through the RYA Junior & Youth National Squads qualifying to represent Team GBR in the Cadet and 420 classes. Moving on from youth dinghy racing James began racing in smaller keelboats such as Etchells, Platu 25 and Match Racing achieving strong results at home and internationally in highly competitive fleets. James is now in his second year in the RYA British Keelboat Academy racing on the Farr 45 with roles including pitman and navigator. James is also a boatbuilder at Maguire Boats who build the Exocet International Moth. 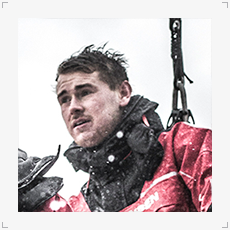 Salterns Sailing club in an Oppie.

When did you know you wanted sailing to be a career?

I can’t remember exactly, but I never really knew what I wanted to do when I was growing up.

Sailing and Racing in particular have been the main thing I have enjoyed doing most of my life, and put the most time and effort into, I want to keep progressing and take it as far as I can.

What do you love most about sailing?

There are so many variable aspects to it; weather, technical, physical and mental fitness, tactics/strategy, management and many more. There are so many things you can and can’t control which make it unique.

How do you keep going when you’re on the limit?

Just think to yourself, it could be worse..

How do you spend your time when not sailing?

Who has inspired you the most?

For Sailing, Frank Camas, It’s amazing what he has achieved in sailing, in so many different classes and types of racing. I don’t think there are many other sailors around who are that versatile.

Favourite position on board?