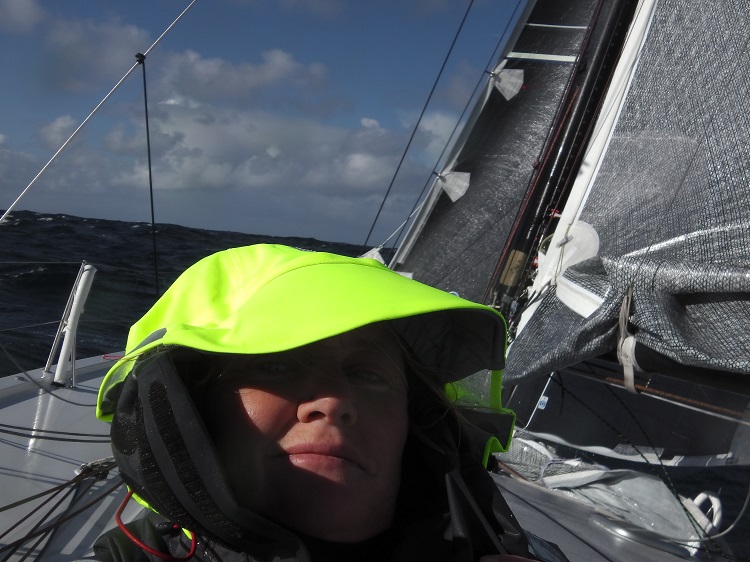 01 Nov Life on board

We have been asked to give a bit of an idea of what life is like on board a “Class 40” boat during these long offshore races.

Well, the early stages of the Route du Rhum and the Transat Jacques Vabre, are rarely pretty.

The races normally start, (for sponsorship reasons), in late October and tend to launch the fleet straight into the face of the autumnal S.E. gales. Breaking out of the English Channel from Le Havre to the Atlantic Ocean, pounding into the wind in freezing conditions is more than just uncomfortable – it’s bone chilling cold, hypothermia inducing and worse.You have a boat speed of say 8 knots and a wind speed of maybe 25 knots –   the two added together gives you what’s called an “apparent wind speed” of (8+25) 33 knots – and that’s what actually hits you in the face – it hurts.

If it was just the wind, no problem!  But, bashing into huge, 25 foot seas, has the boat displacing tons of water as it plunges into one wave after the next.  You end up being “hosed” with “green water”, sometimes feet deep, as it roars down the side decks and engulfs you. Washing you right out of your driving seat.

The weather is freezing, you are soaking wet, and it can seem endless. We are not talking about being doused for a few minutes here!  Our two women sailors have just had a whole week of it – night and day, day and night.

The saltwater reaches places that haven’t seen soap for years’. No matter how tight the seals are around your neck and wrists’, the stuff still gets into your dry suit, down your sea boots – everywhere!

When you eventually clamber down below, still in your sailing kit (it never comes off here), you can’t avoid taking loads of water with you. Then, there’s no place for it to go and no heaters to drive it out.

The water stays in the bottom of the boat where you sleep. Or try to sleep, on the floor, on a big beanbag, jammed between the stringers. Forget comfort!

You have to go where your body weight can do the most good – that is, help keep the boat upright. And all the time you are lying in a primeval gloop of bilge water, spilled coffee, bits of broken biscuit and worse. 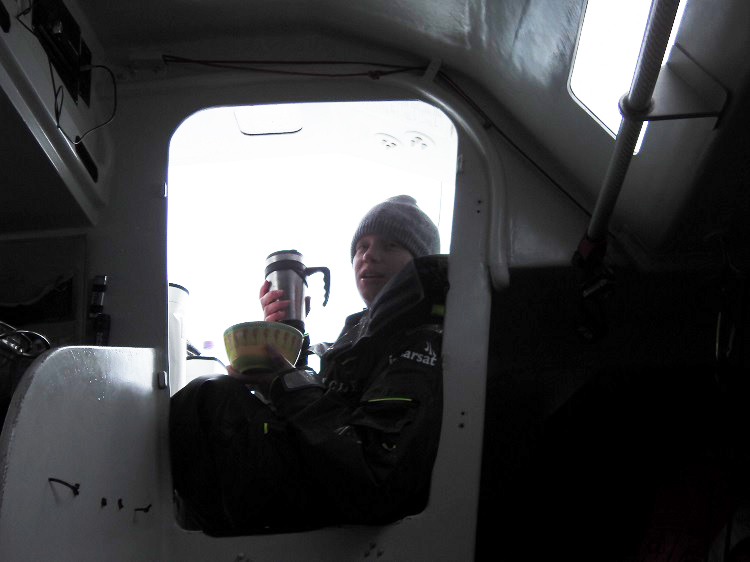 There are lots of things people normally associate with boats, bunks (beds), heads (toilets), a galley (kitchen) – that Class 40’s simply don’t have. Well, at least not in any recognisable sense. They are just considered too heavy, and weight is the enemy of speed.

Heads? You have a bucket. Fill it half full with salt water, perch it some where, use it and “chuck it”.

Galley? There’s a Bunsen burner type of thing which you use to boil cups of water. Pour the water into a foil bag of dehydrated “food” and you have breakfast. Or is it lunch? Or dinner?  They are all the same.

Anything will do as long as you are getting the 6000 calories you need every day to just stay warm, functioning.

Then of course there’s sea sickness.  Everybody suffers from it to some degree. Don’t let anyone tell you otherwise!  It’s how you cope with it that counts, determines whether you can stay the course.

There are a few tricks you can use to avoid, “mal de mer”.  Stay warm for example. Keep your eyes on the horizon. Great advice for a ferry. But our boats, Class 40s, have no windows to speak of and no heating either. Get sick and you can be in real trouble.

While all of this is going on you are trying to get as much speed out of your boat as you can.  Every time you tack, (change direction), you have to move your “kit” –  the half ton + of food, drinking water, spare sails, tools, clothes and the like you carry down below. It has to go from one side of the boat to the other. Or if the wind drops, to the bow of he boat, or if you are running deep, to the stern. It’s back breaking, endless work.

The former Prime Minister Ted Heath, a keen sailor himself, compared offshore racing to, “standing under a cold shower tearing up £5 notes.”

That was 40 years ago, so let’s make it £50 notes with inflation. Other than the Sydney Hobart Race, the P.M. didn’t do any really long races. After all, he had the U.K. to run when he wasn’t sailing. So he never faced the rigors our girls on Concise 2 (HEDKANDI) have just been through. But he did seem to encapsulate what might appear to be futility of offshore sailing.

The masochistic nature of the thing?

So just why do they do it?  After all, thousands of people aspire to these big races. They can’t all be nutters?

Well, if you go to the Transat Jacques Vabre race tracker, it might all be about to reveal itself.

Pip, Pippa are just about reaching the latitude of Gibraltar. Having battled through three serious depressions, squalls and freezing cold for 6 days, the winds have swung aft, blowing a nice 15 knots @ 350 degs.

The sea and air temperature has risen along with their moral and the boat speed. They are heading south at a steady 11 knots (Pippa hit 21 knots last night) under their big Hedkandi spinnaker bound for sunnier climes, swim suits, flying fish and caipirinha’s.

There’s just the simple matter of another 4281 miles to go.