Twenty-six year old Ned has been the Team Concise director/ skipper for the past 8 years. A highly accredited sailor in his own right, he has led the team to some notable victories. He is now renowned as one of the top Class 40 skippers with his young team being described by the Royal Ocean Racing Club as the future of British offshore sailing. 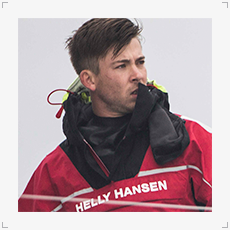 Sailing across the English Channel on a Contessa 32 at 6 months old.

When did you know you wanted sailing to be a career?

What do you love most about sailing?

It allows you to escape life and experience first hand the ferocity of weather.

What has sailing taught you?

How to thrive of extreme physical and mental pressure.

How do you keep going when you’re on the limit?

Think that someone has always experienced worse conditions.

How do you spend your time when not sailing?

Working on running the team, otherwise its Cycling, Climbing, Skiing and eating. I love cooking.

Who has inspired you the most?

Favourite position on board?