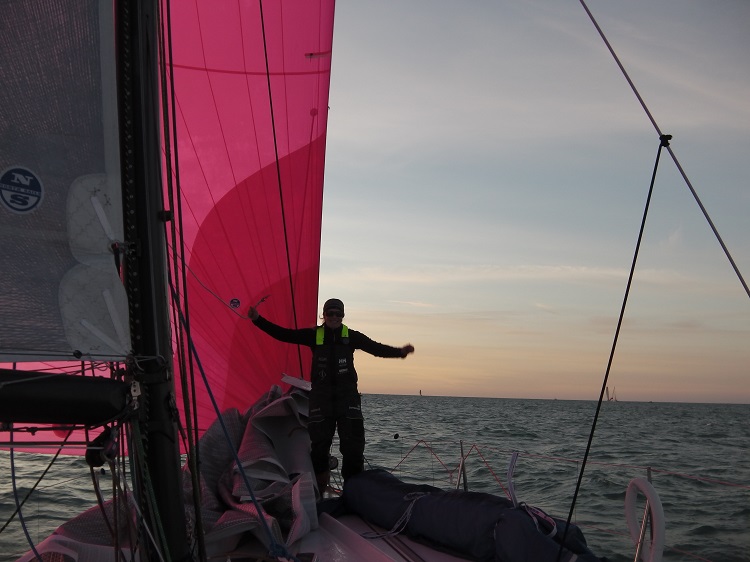 The blast of wind shook everything. It was like an express train charging by. Rudely woken up, I turned over and squinted at the weather repeater by my bed – 50 knots, 53 knots, 45 knots – blowing a gale. My worries were straight away with Pip and Pippa on Concise 2. Then I come round completely, and of course they are two thousand miles away, in a totally different place, a totally different weather system and I’m safe in bed in Haslemere.

In fact, it’s the different weather systems the girls have been coping with these last few days, that’s been giving the shore-crew sleepless nights. While our Longdene HQ suffers the worst winter winds this year, the girls, ironically, have been stuck in an “evil hole”, while formerly slower boats, seeing their predicament, have sailed round them.
After what was a decidedly steady start to the Transat Jacques Vabre, our intrepid ladies on C2 (the only women’s team in the race), had slipped to 11th place. They had followed common practice and pressed out westward into the bruising Atlantic Ocean before heading south for warmer climates and ultimately Brazil.

The bad weather and seas had already taken its toll on their sister-ship. After commanding the start of the race and leading down the English Channel, Jackson and Gildas on Concise 8 had been forced to retire with hull damage. Other boats were soon to quit. But to paraphrase Maggie Thatcher, “our ladies were not for turning.”

Over the next few days as conditions moderated Concise 2 eased her way into a more than satisfactory 5th place, punching well above her weight for an older boat. Back at base we were revelling in it as the girls passed one boat then another. Then the “sweet music stopped. ” It all came to a grinding halt !

Its common knowledge when our boats are racing offshore, back home we are “glued” to the “trackers”. These are the on-board satellite positioning systems that show you exactly where we are, where the other racers are located, and our position the fleet. You get updates on the official race website every half hour. Then we have our own private trackers we can poll more or less whenever we like. To say that following races can be addictive is a total understatement. I have been known to get up 4 or five times a night, when things were “blowing up,” and many of our followers do likewise.

It was the tracker that first warned us that the girls had slowed right down. They had gone from averaging a competitive 10 – 12 knots, to something like 1- 2 knots. In other words, they were simply being carried along by the current on a windless sea. They had found themselves in their own private vacuum. Meanwhile the boats around them, some no more than a few miles away, seemed to just plough on regardless. Or more likely, seeing Concise 2’s “private hell,” altered course and avoided the trap.

Concise 2’s hard fought 5th place become 6th, then seventh. On-board the girls worked ceaselessly, changing headsails to the biggest and lightest, in their armoury in a futile attempt to snare the faintest whiff of a breeze. All to no avail !

At times like this it can be really tough on board both mentally and physically. After-all, Pip and Pippa are both highly competitive – they want to win. You can easily get into a blame game. Who called that shot? Who was driving that last leg? Why didn’t you see it coming? But none of that gets you out of the “hole”.

Meanwhile, the sun you longed for only a week ago, without the cooling breeze becomes your oppressor – and there’s no place to hide. It’s 90 degrees on deck, humid and sweaty – and the same or more below. Your drinking water is luke warm out of the plastic bottles and gives you no relief. Heat rash / rash words. You would give your pinkie for any ice cube! Prickly heat / prickly tempers. And all the time you are thinking, – where’s the wind, where’s the bloody wind. You pray for it – whistle quietly for it – and perform your own private rituals. All to no avail!

How did it get to this? Well looking at the routes of each boat on the race tracker, they certainly didn’t do anything radical – different – or go off on some wild tangent. Earlier, the two giant trimarans had clearly kept more to the African coast to get some “land effect”. But they were days ahead of the other boats, and in different weather. Since then the mono hulls, as they approached the Canaries’ from the north, had more or less stuck to the rhum line – and this is what the girls had done too.

We do know that they had been having problems with the dedicated computer they use for downloading weather information. We had put a new one on-board just before the race and it looks like there was some sort of bug. More than likely they had some unidentified malware operating in the background costing them dearly. The girls rely hugely on downloading weather forecasts from 4 or 5 different sources to “see” what’s going on around them. Additionally, they normally would get satellite pictures taken from space. So it’s possible that without all system firing at full capacity they missed a small localised pressure (wind) aberration and hence their demise.

Anyhow, as my friend the Lord Palumbo of Southwark recently proclaimed, “the Moon is a cheese!” If he says so, then we must assume the World is likewise. In that case it’s most definitely Emmental, full of irregular holes. Sooner or later you all fall into one. Then you simple have to slowly eat your way out of it?

Concise 2 is back up to speed currently in 7th place doing 10 knots
They are just a little SSW of the Cape Verde Islands and have tacked out to the west to position themselves better to cross the Doldrums around longitude 30 W
They have just 2839.7 miles to go