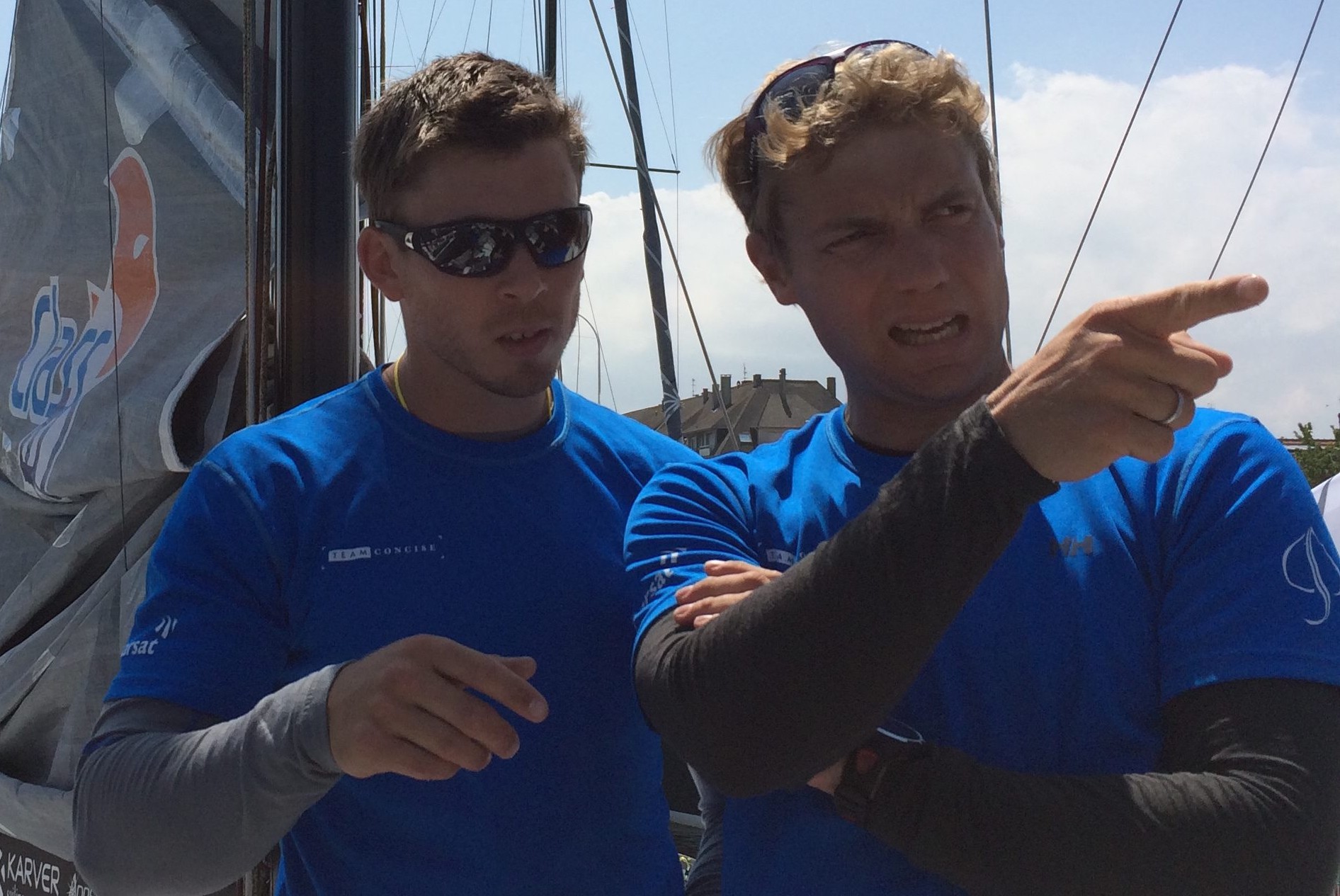 The joys of yachting?

You often hear people talk of, the joys’ of sailing!  Funny, but you rarely hear them say how breakingly  tough  it can be in almost equal measure?  Maybe, it’s some sort of essential defence mechanism? If you remembered half of the bad times, no doubt you would  be less likely to ” splash the cash ” on boats.

After, having battled their way back to the front of the fleet following a slow English Channel crossing,  the crew on Concise 8 set off along the U.K South Coast heading for Lands End in good spirits’. Still sailing in what for us were sub – optimal conditions, Ned and Wouter were looking forward to some better weather. It was not to be! The wind remained soft and fluky.

Having spent more time than was healthy following them on the tracker, (a lesson here for parents who complain about their kids playing too many computer games?), I headed off to see Craig Loomes and his talented young designers at Lomo Ocean. Craig is designing an incredible new chase boat for us so we can  follow the boats when they race and train.

Earlier, I had, “turned the office on”  to our race tracker and while Craig and I beavered away on plans for the new boat, too many of the engineers hovered around the computer, watching the race progress in real time.

Momentarily, one of the guys let out that now famous NZ, expletive –  “BUGGER!” , (as uttered by the Kiwi P.M., when NZ lost the America’s Cup), and went on to shout that, “the boys have turned back”.

Sure enough, Concise 8 was, heading the wrong way at a some 1.5 knots , while boats North and South of her surged ahead doing 6-7 knots.

It’s hard to say here exactly how I felt. Having been through all of the “issues” we had suffered over the last two years, I had hoped our problems were behind us. It was  like being hit in the solar plexus by Mayweather.. OK bear with me here – what’s wrong with a bit of poetic licence? These were for me, very, tense times.

Like yachties check bilges at the first sign of trouble, I checked all of our social media and the Class 40 website. Nothing! No mention of retirements. Nada!  Meanwhile, I held my breath half expecting “the call” from race security. Rien!

Unable to stand it any longer, I pressed auto dial on my mobile and was relieved when a very tired, exhausted sounding Ned picked up the Sat phone.

As I was told, despite apparently having clean air, Concise 8 had sailed smack into a hole in the pitch dark. The rest of the fleet, seeing Ned’s predicament on their AIS systems , steered right round him and ploughed merrily on. Concise 8 saw her hard won 2nd place and three mile lead on the rest of the fleet turn into 6th place and a three mile deficit, as they drifted backwards. windless, on the tide. I was gutted for them.  But, “being the very model of a Modern Major General”, (who according to the opera leads his troops from behind), I put on  a brave face, told the guys to have a cup of tea with three sugars, and, as they had done once before, get back to it and reclaim their place at the table.

The afternoon passed slowly for me as Concise 8 clawed her way back to the front. At the time of writing (0600 hrs Kiwi time), they have rounded Lands End and are beating towards Ireland. Additionally, they have reduced the lead boats one time 10 mile advantage to 2.2 miles. They “banged  the corner”  at Lands End which helped.

This as you can imagine all left me drained. I was rescued by one of my former skippers’

who just happened to be in town. He dragged me off to the trendy Musa . Aukland’s restaurant de jour, where  from what I remember, I rebuilt my strength with – Miso Cod, Crab Taco, Sashimi, Soft Shell Crab, Lamb Cutlets , Clam Miso, Spicy Tuna Rolls & Rice. All washed down with two excellent flasks of Ranman Reiro Saki and of course, some elegant  Green Tea. They were all quite small portions. I would not like you to think I am greedy?

Meanwhile the boys on Concise 8 were settling down to some rehydrated Vesta Curry.

The pleasure and pain of yachting?