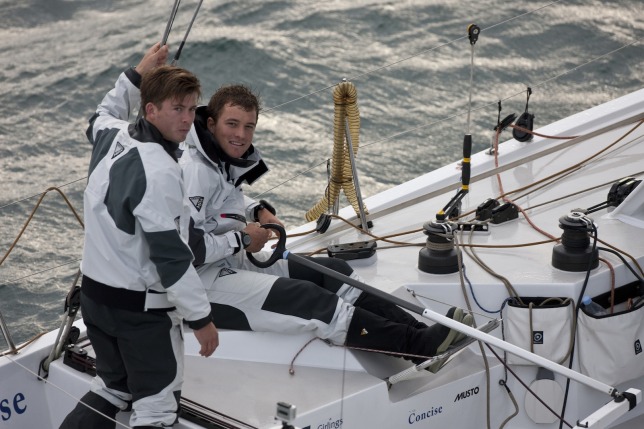 At just 23 and 21 years old, Ned and Sam, are the youngest team ever to enter this iconic offshore race which goes from France to Costa Rica.

After the prologue Ned commented, “The result has given us a lot more confidence. We beat an international fleet with a lot of  experienced Class 40 sailors including the winners of this year’s Fastnet and last year’s Route du Rhum. Bearing in mind that it’s the first time Sam and I have raced together I am really pleased with the result”.

Sam Goodchild added, “We did a well timed start and held onto the lead more or less the whole way round. We don’t have any elusions though. The actual TJV  is  a major  offshore event, not a ’round the buoys’  race, but we will sleep better tonight with a win in the bag”.

The prologue, a 15 mile demonstration race, was organised for the benefit of the thousands of spectators and supporters who had flocked to Le Havre for the main event.  However, in a tense meeting with the crews, just hours before the planned departure the decision was taken to postpone the start on account of deteriorating weather.

In an unusual show of solidarity the IMOCA 60 fleet stated that whereas for the most part they were prepared to go, they did not want to start without their smaller compatriots, on the 50 foot trimarans and in the Class 40’s. They wanted a race for all, not just a survival exercise.

The weather forecast showed a series of depressions barrelling in from the west. Whereas the 60’s might have escaped the worst conditions  it would have left the smaller boats in 45 knots of wind – gusting to 70 knots according to some predictions and nowhere to go.

One American forecaster described the situation as a “historic event “ in weather terms.